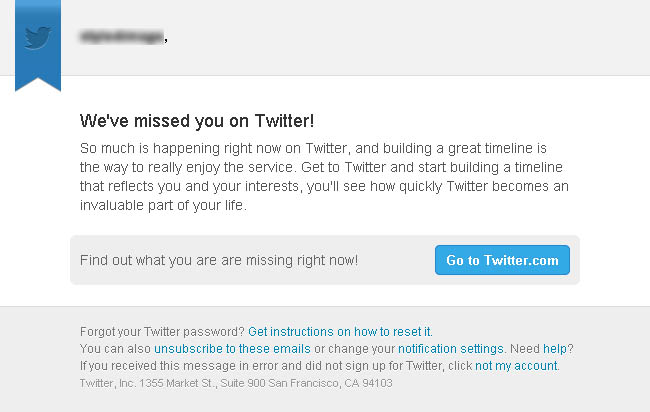 The account concerned has been inactive for several months (this includes both logging in on Twitter.com as well as tweeting, regardless of client to post the tweet), so it’s not such an odd thing the reactivation campaign kicked into gear.
The way Twitter goes about it is quite simple actually, yet thought through: why does someone not log into or use Twitter for a while? Answer: because they’re not ‘hooked’ on it, there’s not enough in it for that person to keep them coming back regularly. Therefor they promote following more Twitter accounts (building a timeline that reflects me and my interests).
Next to that, they have some helpful links at the bottom. Because when you’ve been out of the loop for a while, you could have forgotten your password. Also, you might need help or tune the notifications settings.
All in all, it’s a decent campaign: another reactivation campaign in the same style is one where Twitter advises some accounts to follow based on who you already follow on Twitter. This one however is only sent out when you have been inactive for quite a while.
[relatedPosts]