I’ve posted about Tumblr email marketing several times before. They send out messages very frequently, and know their audience very well. The visual aspect of their platform is represented in their emails. This time I’m highlighting one of their recent ‘The things on the Internet today‏’ emails. Excellent subject line by the way: it’s like a ‘you don’t want to miss this’ notification.
The email that is the subject of this Tumblr email marketing post:

Subjects are pretty familiar: Obamacare, makeup, comedian and video, as well as others. Also, a mini promo for their mobile apps, which they have promoted separatedly before.
Here’s the little email marketing animation from the first ‘tab’ of the email – click the image to view the animation: 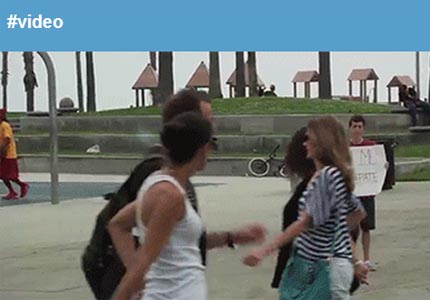 The animation itself is an animated gif, and will work on all email clients except office clients like Outlook 2007 / 2010 / 2013 and such. As Tumblr has mostly a young and hip audience, there’s mobile devices all around, and if not, people will mostly use webmail for their email instead of office clients.
In the case of mobile devices, the animated gif is an eye-catcher for sure. Even though it’s 1,5MB which is fairly large, it’s not huge. On most connections it should be downloaded within a few seconds. The animation loops well enough to draw attention and have people click through to the video tag on Tumblr. Just one subtle yet effective way Tumblr email marketing is executed: keep it up guys. Just like Twitter or any other online platform, Tumblr needs to keep their users active. What better way to achieve this goal than with email marketing? It’s cost effective, can pull content from the platform with little effort and is hugely trackable.
Tumblr uses Google Analytics for tracking their email marketing campaign performance btw – which is a great web statistics platform for sure. Email campaigns can be tracked just as any other campaign, right down to the link/term level from the campaign level.
[relatedPosts]