In case you haven’t noticed: social loves email. All those social networks need one thing to stay alive: traffic. To get traffic, they need to spread the word. Having retweets, likes, shares and repins on their social networks is not enough. They need to reach out through other channels.
The way they do that is by using the channel that has been tried and tested: email. Every time you register with a platform or network, it requests your email address and a password. Everything else is a bonus.
Because they have your email address, they can send you (a lot of) email. Email notifications are turned on by default, most of the time.
Who are the biggest senders then, compared to the big webmail guys like Yahoo and Hotmail? Here are the total email volume statistics of the past month, from the Top 100 senders over at Cisco’s IronPort SenderBase. 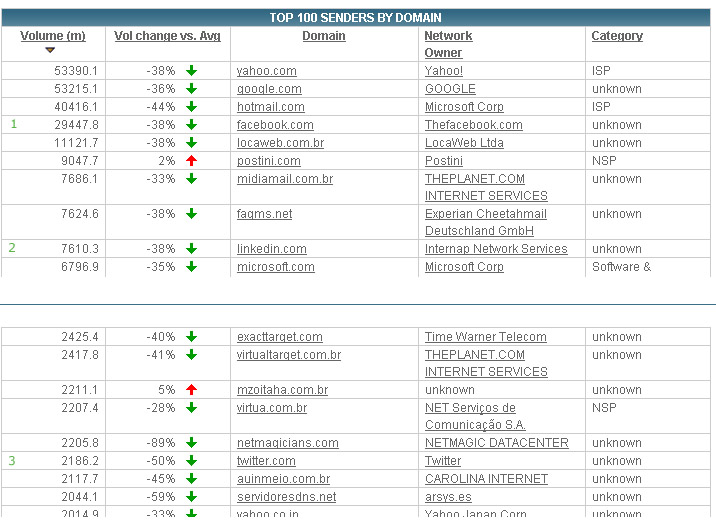 See any trends? Besides Yahoo, Google (for Gmail) and Hotmail making up the top three with no less than 147 billion messages, Facebook comes in 4th with nearly 30 billion messages. That’s 1 billion emails per day, sent by Facebook! 2nd (of the social networks) is LinkedIn with 7,6 billion and 3rd is Twitter with a subtle 2 billion. That’s still over 2 million emails per day.
On a good day, Facebook will even send 6 billion emails, however recently volume has been going down (see second column in chart).
In September last year Facebook announced that they would be reducing separate notifications and instead, send summary emails less frequently.
On the Twitter side of things, just recently they announced that you can now receive a weekly email digest of the best tweets: containing the most relevant tweets and the ones you would see in the Twitter Discovery tab.
Might Twitter been experiencing a drop in activity recently, so they turned to good old email to ramp up traffic? It might sound a bit odd that a social network, where you are expected to login or use via 3rd party options like Tweetdeck or Hootsuite, is using email for getting more activity. But then again: why not? Your email address is the first and probably most important thing you will ever enter into their database.
One more recent rising star is Pinterest. They’ve been growing like crazy in the past month, showing traffic and active users only surpassed by Facebook and Twitter. March saw in excess of 18 million visitors.
However, their growth is leveling off a bit. A month ago, USAToday reported that the month-over-month growth was ‘just’ one million, while growth between January and February was 6 million. Even so, one million is a lot of people!
They’ve started to send out emails too recently, and here’s the email I received from Pinterest today: 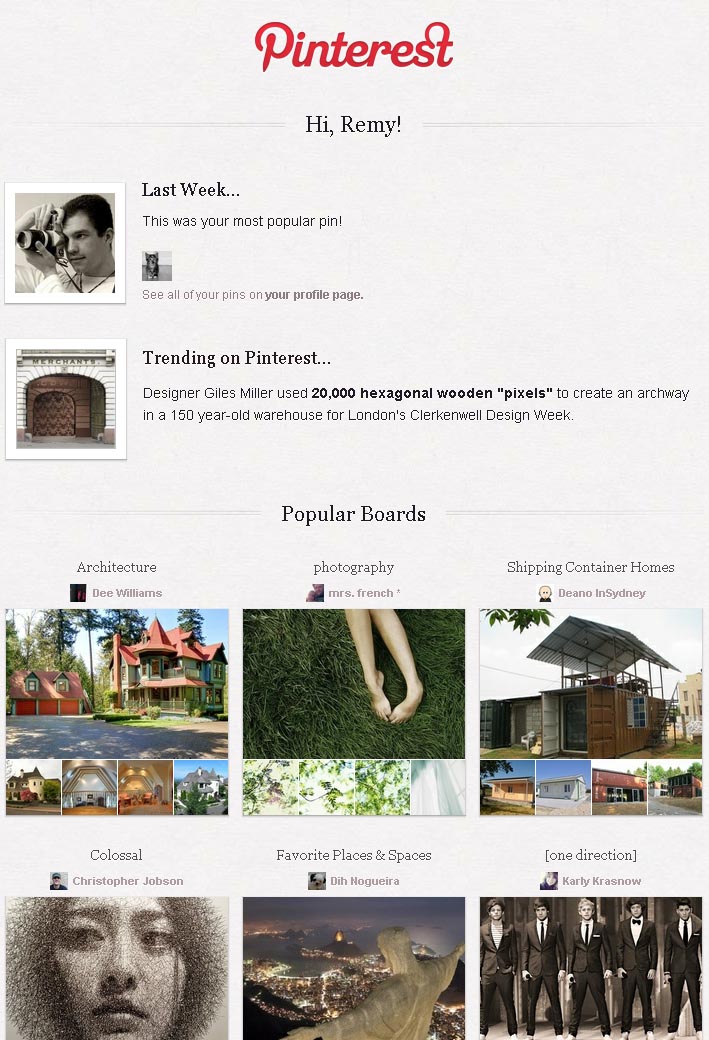 Why is Pinterest turning to email, while they normally see more than enough traffic through their website and their apps?
One reason could be that the 2-year old startup has recently gotten a big financial injection and investor, so there’s now more room to expand on the online marketing machine.
Also, its users are divided in a few camps (like many social networks): the superusers who are ‘always on’, the ‘once every few days’ people who keep an eye out for it, but not as a daily routine, and then there’s those that only have a look once a month.
The emails like the above one are not meant for the superusers, but especially for the second and third group. Unique visitors, traffic and clicks (and (re)pins) are the things that count. In the end Pinterest will be able to say to a future investor or buyer: we have upwards of 100 million uniques per month. That’s a lot of eyeballs. You want in? You’ll pay.
Thankfully, email is the silent force behind part of the growth experienced by Pinterest, LinkedIn, Facebook and Twitter.
It’s amazing to hear some people say ‘social will kill email’. I now have the best response: Facebook is one of the single biggest email senders in the world. That’s massive.
Social loves email, for sure.
[relatedPosts]