The Return Path State of the Inbox Q4 2014 report has been released. Over the period of October 1st until December 31st, inboxes have been monitored with regards to mail frequency.
The results indicate that email marketing is doing fine: people have not been overloaded with messages in the Q4 period, which includes major ecommerce moments like Black Friday and Christmas.
Below is the graphic showing the daily email volume in the inbox for Q4 2014: 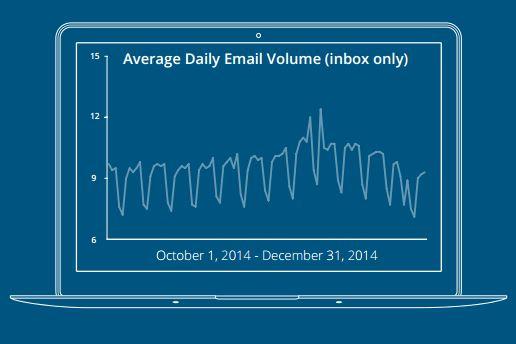 The peak shown just to the right of the middle is around Black Friday, which occured on November 28th.

Also visible in the graphic is the average daily inbox email volume, which sits at about 10 messages per day. This is not a lot, and this is noted in the State of the Inbox document by Return Path:

“Don’t believe the hype: There was no holiday email blizzard burying subscribers under heaps of unwelcome marketing messages. Neither was there a consumer backlash against email marketing, or evidence of weakening engagement or offer fatigue around Christmas 2014. In fact consumers’ interest in email marketing actually increased during the peak of the holiday shopping season.”

Of course, nobody is average: according the the Return Path State of the Inbox Q4 2014 findings, when it comes to the more crowded inboxes, there’s 14% of people who receive more than 20 messages per day. However, nearly 46% of people receive fewer than 6 messages per day: 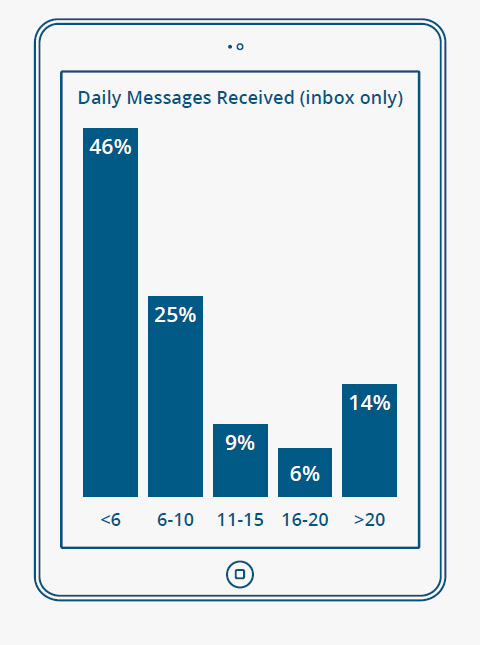 Also, inbox engagement didn’t suffer from the holiday shopping season. Subscribers read 22,4% of their daily messages during the holiday shopping season, compared to the quarterly average of 22,8%. The other good news for retail brands is that complaints about increases in commercial email were often not about retail message: for every 10,000 messages in the ‘shopping’ category only 63 ‘this is spam’ complaints were received. This rate is lower than other categories like travel, news, finance and entertainment.
The results in the Return Path State of the Inbox Q4 2014 are based on more than 2 million inboxes and more than 3.8 billion messages analyzed by Return Path in Q4 of 2014. You can download the research pdf with more details on the Return Path website.