A new responsive MailChimp will be launched this Monday, June 17th. We noted the upcoming release a short while ago, but now it’s got a definitive date.
The main change will involve the platform becoming a new responsive MailChimp: it will be optimized for tablets. This makes working on your email campaigns less of a ‘chained to your desk’ task. Using it on a smartphone though is not recommended: more on that below.
MailChimp stresses that for this release, they have taken in a lot of feedback from its users.
The interface will look like this on a tablet: 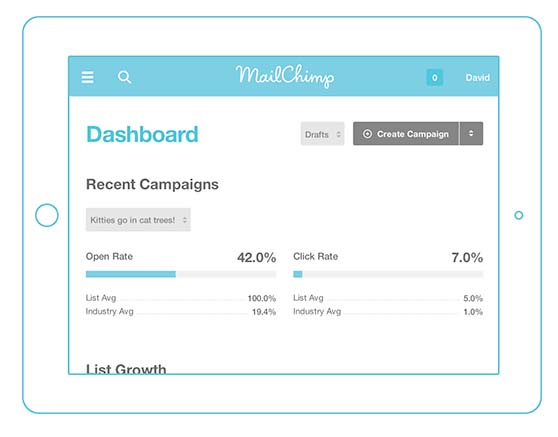 A quote from Ben Chestnut, CEO of MailChimp which he posted on the previous post:

Thanks for noticing! There’s obviously a lot of talk about “mobile” in our industry. What’s difficult to convey is that this redesign isn’t so much about email responsiveness (which is important, but already taken care of with some of our previous releases), and not about mobile aesthetics or even so much about mobile usability, but about increasingly mobile and increasingly collaborative workers.
That’s the motivation behind these changes, so I appreciate your coverage of this. One tiny clarification — while it’s important to us that MailChimp works decently on your smartphone’s browser, it’s not “designed to work on the smartphone.” Our target screen size is a 7″ tablet. Our goal is that you can achieve some of the more important tasks on a smartphone, but to achieve full functionality (and a full chimpy-experience), we’ll be relying more on native apps.

The navigation has been simplified as well. Next to the new responsive MailChimp, removing clutter in the interface while doing your tasks was important. Certain options that are not often used, have been hidden behind dropdowns and/or submenus, for instance. This way you can work faster through the various parts of sending out an email campaign.
[relatedPosts]