The new Gmail interface for mobile compared to the old one (old on right): 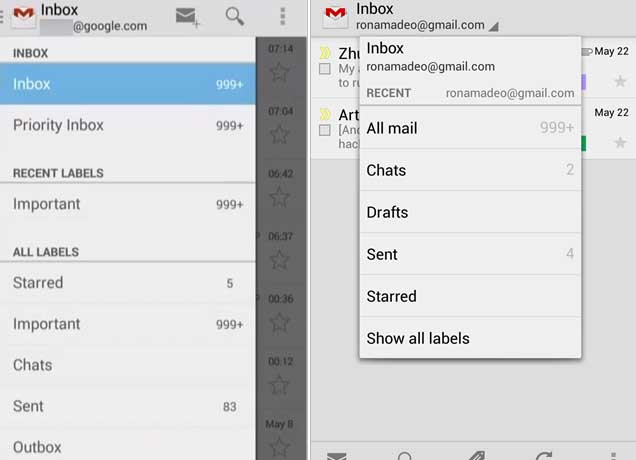 Quite a difference there: the triple dots top left of the screen, called the navigation drawer. Also, the bottom navigation buttons are gone. Next to that, switching between the Inbox and Priority Inbox is much quicker than the old interface. We already reported on a smaller Gmail interface update back in March.
There will be a new Gmail interface for the webmail client too. It will change into a tabbed interface showing four tabs. These are Primary, Social, Promotions and Updates. A big change to the inbox for the first time in ages. This will mean a split between type of emails before the user has anything done with them (filtering / foldering, labeling and such).
Here’s a screenshot of the tabbed Gmail webmail client:

As you can see, social updates and notifications are dropped in Social. Promotions is where email offers will land and Updates seems to contain product news and/or transactional emails.
This is a big change from the current interface, and will become a challenge for email marketers. If this new Gmail interface will mean email will automatically land in one of those separate four tabs, reaching the Primary inbox will not be standard. Marketers will have to make sure their email offers such good content, relevance and value that the subscriber will want to view it even if it ‘hides’ behind a different tab.
There’s no information about when these new interfaces for mobile and web will be rolled out. But it’s safe to say that it’s one of the biggest changes in recent years for Gmail. It could be that the Google engineers are feeling the Gmail interface needed an overhaul after the general ‘Google +’ update last year. Outlook.com has had its rollout and so far, the response has been generally positive by the users.
Sources:
The Next Web
Android Police
The Verge