I love it when a mainstream social media site, in this case none less than Mashable, dives into the combined world of email marketing and social media: specifically a report on unsubscribes called ‘The Social Break-up’ pieced together by ExactTarget. The report (which you can get here) gives an overview of why and how people unsubscribe from emails, Facebook and Twitter and how it affects the relationship of people with a brand or product.
One of the key insights posted by Mashable is that no less than 90% of people unsubscribe because of too frequent, irrelevant or boring messages being sent their way. That’s quite a big chunk of the total group of unsubscribers for just a few reasons: this should make it easier for marketers on the sender side to take note and combat or even better, prevent those unsubscribes.
The full set of reasons most interesting for email marketers of why people unsubscribe from permission emails is below: 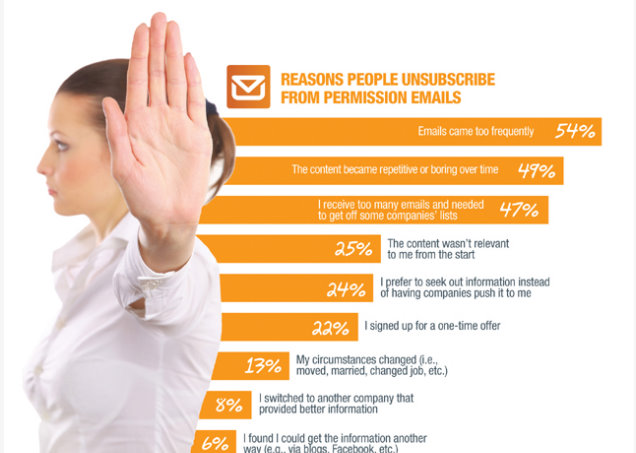 Other findings include the following:

Take note that this is a report on the state of social unsubscribes in the USA: things could be a little different in Europe as usage of both email and social media is slightly different in terms of platforms, age groups and frequency. The report can be downloaded here.

3 thoughts on “Insights into Social Break-up report by ExactTarget”