In a post called ‘10 reasons to switch to Hotmail‘ on the Inside Windows Live blog, Dick Craddock announces the Outlook Hotmail connector. This connector will allow Outlook users to connect their personal Hotmail accounts to their Outlook accounts the manage both their work and private email from within the Outlook email client. On a sidenote, Craddock notes that Hotmail has more than 350 million users worldwide, whereas Outlook is currently being used by over 150 million people.
The switch in the title of the post doesn’t mean the switch from Outlook to Hotmail, but other (web) email services (like Gmail, I imagine) to Hotmail. A roundup of the 10 points:
1.  Flags – remember which emails need to be acted on.
2.  Instant actions – a right click menu with standard email actions like reply, forward, move and more.
3.  Offline access – Sync Hotmail data and have it available when a connection is not so available.
4.  Shared family calendar – access and manage Hotmail calendars in Outlook
5.  Drag & drop email, appointments and contacts
6.  Rules work with Hotmail in Outlook 2010
7.  Keeping accounts separate – selecting From button to keep work and private separate
8.  Easy management of folders and subfolders
9.  Junk list synchronisation between Outlook (2010 only) and Hotmail
10.Your fave feature?
The instant actions in both Hotmail (right) and Outlook (left) side by side: 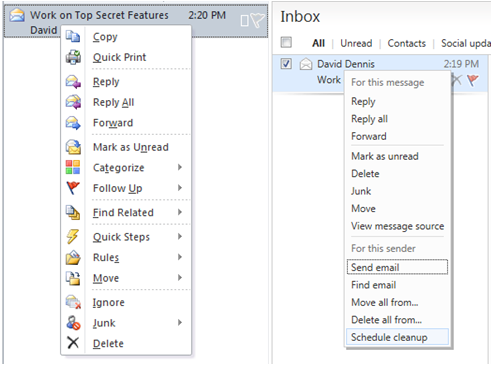 Will this be enough to make people switch? Just a few months ago I posted ‘The webmail war is on it seems‘  which included videos by Hotmail and Gmail promoting (or hammering their competitors) their email service.
I’m not sure about the current number of active GMail users, but it has been growing in recent years: in that same webmail war post I posted the numbers sent by Mailchimp to the big email providers, and Gmail was right on the heels of Hotmail (both at or around 250 million).
Just recently Gmail has updated its interface to get it up to par to its 2011 design style and in corporate product style which was first introduced with Google+. And while we’re on the subject of Google+: with its introduction on June 28th it has made a revival of dormant Gmail accounts which have not been used as primary email accounts so far. With its notification system on the top bar in all Google’s services it makes people aware of anything happening in Google+ and racked up no less than 50 million users in just over 4 months.
Returning to Hotmail and Outlook: will this connector be enough to make YOU switch? Do you use Outlook at work or not, and would you like this functionality? Feel free to post your thoughts in the comments.
[relatedPosts]