The invite-only Inbox by Gmail is now available for iPad. You can download Inbox by Gmail for iPad in the iTunes app store here. For those who were already a fan of Inbox by Gmail on their smartphone devices, you can now enjoy the new email client on the big mobile screen. 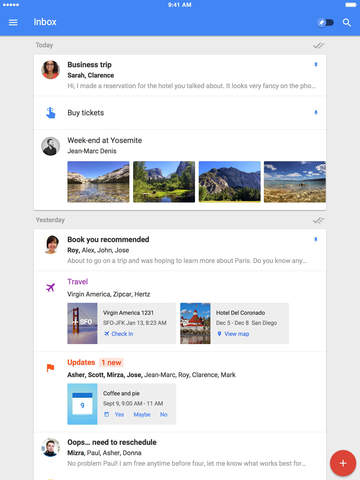 For those who missed it: Inbox by Gmail is the new email client from Google. It is developed by the Gmail team, but is a standalone email client. Recently however, some of the functionality in Inbox by Gmail have found their way in the regular Gmail app.
Inbox by Gmail is still invite-only, and you can get an invite by sending an email to inbox@google.com. More details about the invite system are explained at this Google Support page.
Back in december, the Inbox by Gmail development team did an AMA (ask me anything) session on Reddit. See the full thread of questions and answers here.
One interesting question posed in that AMA was why the Inbox by Gmail functionality wasn’t integrated in Gmail itself in the first place. The answer from one of the product developers:

The way people use email has changed a huge amount since we launched Gmail. With Inbox, we took a step back and did a lot of research into how most people are using email today. What we found was that email works as a todo list for many people, that phone usage is starting to eclipse desktop usage, and that many people have negative feelings towards email because it feels like so much work. We built Inbox as a separate product because we didn’t feel like we could solve those problems by just adding more features on to Gmail. We needed to start from scratch to build a tool that really helps you stay on top of your life.

Inbox by Gmail was launched in October 2014. You can read more on the original launch here.

2 thoughts on “Inbox by Gmail is now available for iPad”