After the invite reported last week for the event today at 10AM Pacific Time in San Francisco, Facebook has launched it’s new Messages system at the event. Reported on back in February with the working title Project Titan, Facebook’s new service will replace the current Messages service with a full featured message client across many clients including email. A lot of rumors led to believe Facebook would launch an email service, but it’s more than that. The actual channel used is irrelevant.
The messaging system has gotten an overhaul to be able to handle these things:

See the below graphic for the goals of the next generation of messaging: 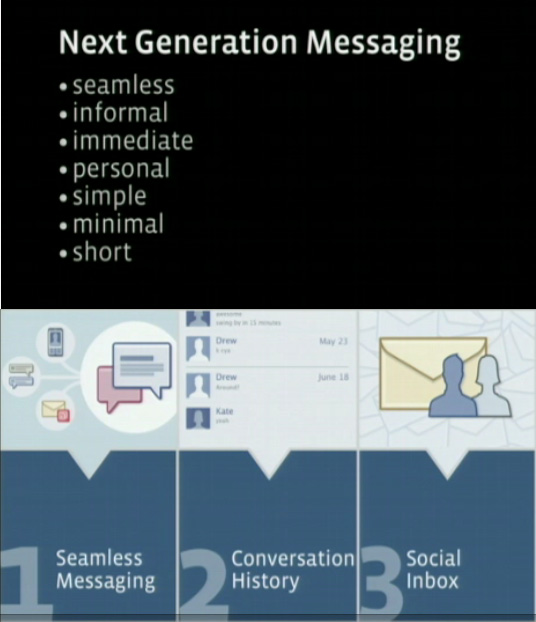 The goals of this messaging system are to have people choose who they want to communicate with, regardless of through which channel that will be. Available channels are several IM clients, email, SMS/text and all Facebook channels/apps. File attachements are also supported. Other goals include limiting the received messages by letting the users control from whom they’ll accept messages: next to that is the instant and simple feel of the messaging system.
A screenshot of the new messaging system: 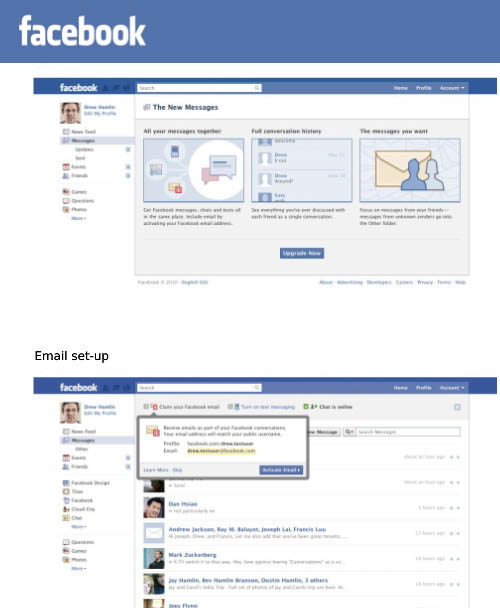 During the presentation Facebook chief Mark Zuckerberg noted that the new Messages system will not be a ‘GMail-killer’: email will be part of the new messaging system, but it will be more than that. He does expect that part of conversations currently running via email will be running 0n Facebook Messages instead in the future. Messages forwarding is possible, and adding people to a message thread is possible, as is leaving one. 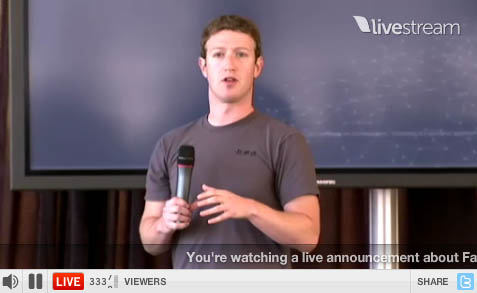 From launch it will be invite only to test the system first and see how the platform and Facebook servers handles the load: after this invite period it will be available to all. Facebook will be providing users with an email address if they want, but it is not necessary for using the new Messaging service. The conversations and the people are more important than the way the actually communicate, including the technology used.
Update 1:
The full press conference can be viewed below:

Update 2: invitations can be requested here.
Update 3: My take on it:
I think this might help some people streamline their conversations, or at least make those conversations simpler. However there are some people who actually like to have their conversations and channels separated, and contrary to what Facebook is trying to do -not- combine them in one stream. This allows those people to converse with certain people through certain channels (e.g. Facebook, email, text, Twitter and such) without those channels flowing into eachother. It puts people at ease knowing through which channel they are communicating and how: it gives them the right state of mind and message presets to communicate correctly ‘to the other end’.
For those ‘stuck’ on Facebook for almost everything, be it gaming, messaging, wall posting or whatever, this will be a nice addition and/or replacement of other channels: Mark Zuckerberg noted that he likes GMail as a product but still expects email to go away or at least take a back seat compared to current usage volumes. Depending on your type of contacts and connections, this might be true: but if you have something like 50 Facebook friends and 500 email contacts, 200 text contacts and 300 LinkedIn connections, which channel and interface will win?
It will also depend on uptake and Facebook tweaking the new system for future features and the way people will actually start using it. The whitelisting by ‘default’ is interesting: if you want you can block just about everything and everyone sending you a message instead of a select few. The advantage of this is that the social inbox of Facebook will be a revelation in terms of busy conversations compared to your regular email inbox, or maybe your Twitter timeline. We will have to see how that pans out in the near and further future.