This weeks email news is mostly centered around blocklists/spam, permission, open rates and the state of the email marketing industry including permission.
Starting with the technical side of email marketing, here’s a Mailchimp blog post called How blocklist operators think: it notes the crazy and challenging stuff going on in deliverability land.
Following that, the next bit of news comes from Germany having a secure way to deal with spam. Might sound to good to be true, maybe it is, maybe it will work. A quote:

De-mail — a play on the country-code abbreviation for Deutschland (Germany) and the word e-mail — is a government-backed service in which all messages will be encrypted and digitally signed so they cannot be intercepted or modified in transit. Businesses and individuals wanting to send or receive De-mail messages will have to prove their real-world identity and associate that with a new De-mail address from a government-approved service provider. The service will be enabled by a new law that the government expects will be in force by the end of this month. It will allow service providers to charge for sending messages if they wish.
Eliminating spam is not the primary purpose of De-mail — in fact, service providers will be legally obliged to deliver every De-mail message, without blocking any, just as the postal service is not supposed to throw away your mail.

Read the full story here.
Staying with the spamverse, the one year anniversary of the DBL (Domain Block List) brings a new zone by Spamhaus. The post notes about the way the Domain Block List works, and like Ben Chestnut mentioned in the earlier MailChimp blog post new challenges have been coming and going, but the battle could one day be fought, because…
Lastly about spam: Symantec notes the state of the global spam volume. After a dip late December 2010 / early 2011, spam has been on the rise, but nowhere near the volume of last year. See the post and graphic below, comparing February 2010 to 2011. That’s a drop 80 billion emails you see there in 12 months. Written in full for significance: 80.000.000.000 emails less.
http://www.symantec.com/connect/ja/blogs/update-global-spam-volume 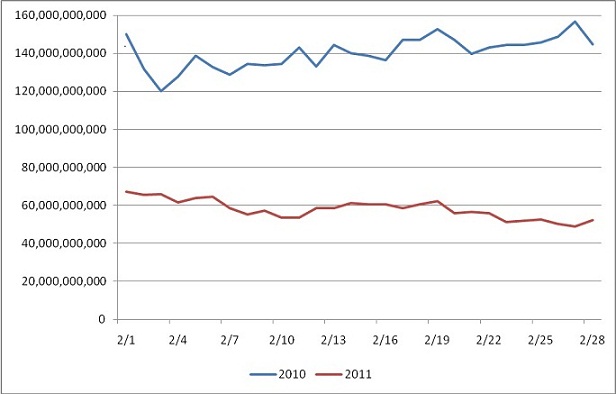 Ken Magill newsletter: Crappy food, jail threat could lift opens: read it here
Another Ken Magill item: Ask an Expert: How to Evangelize Permission: read it here
Lastly, the future of email is discussed, including Google and Microsoft employees shedding light on webmail, and that it’s not a money maker for them: read it here