In this first of a three post series I will take a look at the future of email marketing, which in my opinion will be bright and not dead. I’m not saying this because I am in the email marketing business, but because it’s only expanding: both bigger and better. This first episode will see mobile highlighted: a platform that has been gaining strong momentum, especially last year, but also ever since the first real convenient smartphone was picked up en masse: the iPhone.
The reason that this smartphone was a turnaround in regards to email was its simplicity, availability and likability from an end user point of view. I’m not forgetting the Blackberry squad (which need separate email servers) or other smartphones (like Nokia’s Communicator series)  here, but the iPhone was the first ‘next gen’ smartphone which inspired many dozens of new models from competitors. It was launched in mid 2007, nearly 4 years ago which seems like ages: since then the series has progressed to a fourth model with a higher res screen, faster and more versatile interface and more.
What’s so special about smartphones when it comes to email? Well, apparently the people who own a smartphone spend nearly half their time on email according to this post on Mashable (original Nielsen report here). When it comes to email marketing, Litmus has made a statistical analysis of which email client had what percentage of market share over a volume of 250 million messages. It turned out that iPhone was at 4%, or 5th place overall. Campaign Monitor posted stats on 2009 in 2010 that showed iPhone at a 7% market share. This report is from Feb 2010, and now in 2011 that market share (and that of other smartphone platforms like Android and Blackberry) has grown to a very serious size. How serious? In the fourth quarter of 2010 no less than 32.9 million Android devices where shipped worldwide.
Talking about market share, how is it distributed along the various platforms? Take a look: 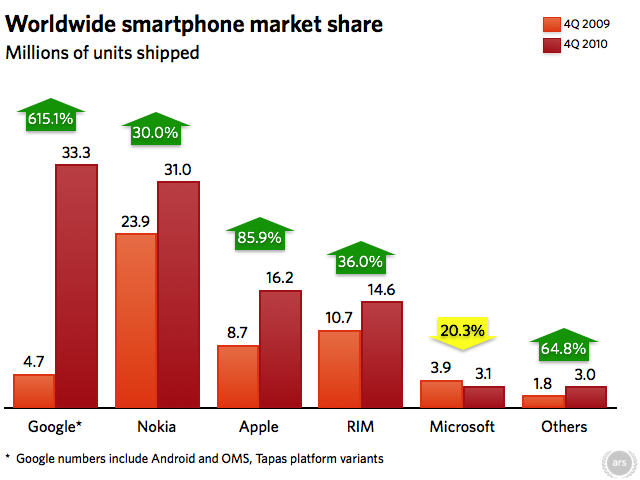 How many smartphones hit the market in total in 2010? Hold on to your seats: 300 million. That’s 300 million new mobile email inboxes to take into account for your email marketing campaigns. Is it really 300 million? How many people did use email on their smartphones in November 2010? 70 million a few times a month, 43,5 million on a daily basis. A quote:

“In a relatively short period of time, adoption of mobile email has reached 78 percent of the smartphone population, which is very similar to the penetration of web-based email among Internet users. These findings demonstrate just how quickly channel shifts can occur and why it’s now essential for media brands to have a strong presence in both arenas.”

More stats on smartphones can be found at Email Marketing Reports here.
Do companies already take the rising use of mobile email clients into account? Few are, sadly. A recent tweet by Andrew Kordek triggered me to do some Photoshop work on resolutions and in part inspired this post (thanks Andrew). Here’s Hottopics email, with a resolution overlay of the iPhone 2G/3G(s) and HTC Desire: 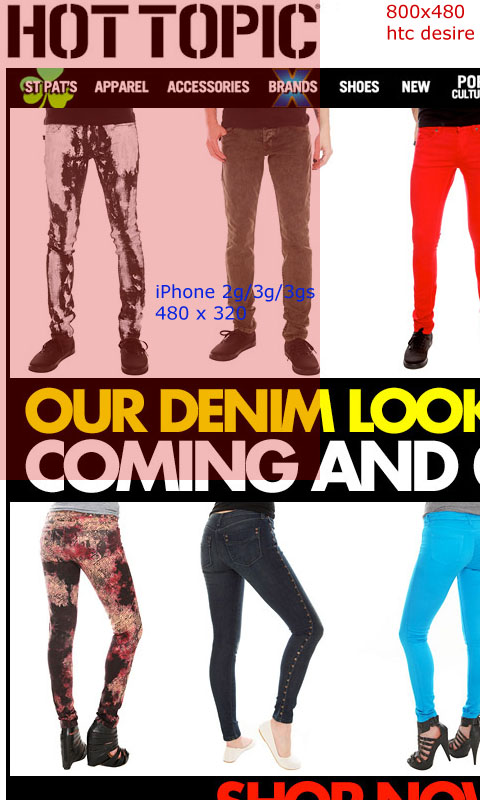 As you can see, less than a quarter of the email can be viewed on an iPhone’s 2g/3g(s) screen. About 60% to 70% would be visible on an HTC Desire screen, or that of an iPhone 4. But what about imagery? Some people are limited in terms of wireless speed or overall monthly bandwidth usage, and because of this quite some people will not be downloading the images on their smartphone. An all image newsletter would in this case be a bad idea, some would see it as an empty email: an email marketers nightmare.
So, how to prepare for the mobile email onslaught as an email marketer? Here’s some pointers to get you up and running and not missing the mobile email marketing bus.
– What are your subscribers using? If mobile is not big, you can ignore it. If it’s more than 5 or 10% of your total contact list it deserves attention. You can measure email client usage with Email Analytics from Litmus, for instance.
– Is there an ideal resolution? No there isn’t, but the classic 600 to 650px wide email could be abandonned in favor of a more condensed email: having 480 to 500px wide as a maximum will show the email at (near) full width without zooming on many smartphones.
– Images vs text: be sure to make the first area visible on a smartphone as complete and telling as possible: who is it from, what’s it about, what’s in it for me, what should I do with it? If you need some text in the top left corner of your email, so be it: save the graphics for the latter part of the email.
– Size: even though mobile devices are powerful these days, actual data load can be a heavy burden on both connections and a smartphone’s storage and memory. Try to optimize graphics as much as possible and keep resolution to the bare minimum: it’ll save a lot of data.
– Does the subject line and snippet still matter? More or less than on other email clients?  I believe they still matter, and even more so than on other email clients. As noted in ‘subject lines and mobile: what works?‘ the subject line is the first and biggest thing that’s shown of your email. Better make it a good one. The snippet will be the first thing shown top left in the email, so a slogan, campaign message or such can be put there for maximum effect.
– How do I test my email on mobile platforms? Chances are that you own a smartphone yourself (or even are viewing this post on your smartphone: 7% of all visits to this site in 2011 were from mobile): send your email campaign to yourself on your smartphone now to see how your email scores on mobile. If it doesn’t score any points, don’t worry: you can do something about it.
Hopefully you’re ready for the mobile email revolution, and if not, the above pointers will help guide you along the way.
Further mobile email resources:
– Stylecampaign blog
– Email Marketing Reports – mobile section
– Five keys to a mobile-ready email design
In the next episode I will highlight the next big thing in email marketing: relevancy.
[relatedPosts]