Yes, seriously. Sending one email a day sounds like fun, but receiving it? Not so sure. Have a look:

Since December 1st there’s one email per day, and before that one every ~ two days. The campaign 12 days of gifts started on Dec 1st, and kept going on ’till Dec 13th. In a 21-day window I received no less than 20 messages, averaging almost one a day. Imagine I’m subscribed to about 25 mailing lists of various companies: not uncommon these days. Imagine that all the marketers at all those companies have decided that Dec 1st would be their ‘let’s give this a big last blast run’ starting point, and they started sending out one message a day, like HP. A calculation of the amount of emails received in the 21-day time frame would result in a total of no less than 525 messages. That’s from 25 mailing lists alone: not counting personal email, notifications, invoices and all other type of email. Remember the crowded inboxes post I did 2,5 months ago? Here’s the prime example, right there.
First thing that comes to many people’s mind is: why don’t you just unsubscribe? That’ll teach them! But that’s not what I want. I want less, not nothing. Second suggestion would be to pause subscription or change the frequency, but neither is possible from the mailings: just unsubscribe and change email options. The emails themselves don’t look bad, but it seems the marketing crew over at HP haven’t looked at this from the receiving end: how would you feel if you would be spammed-a-lot without being able to do something about it except unsubscribing? Pretty all or nothing situation, which should not be the case. I wonder how many unsubscribes HP received because of ramping up their frequency: it also depends on expectations by the subscriber of course.
To close, here’s an example, the first email received on Dec 1st: 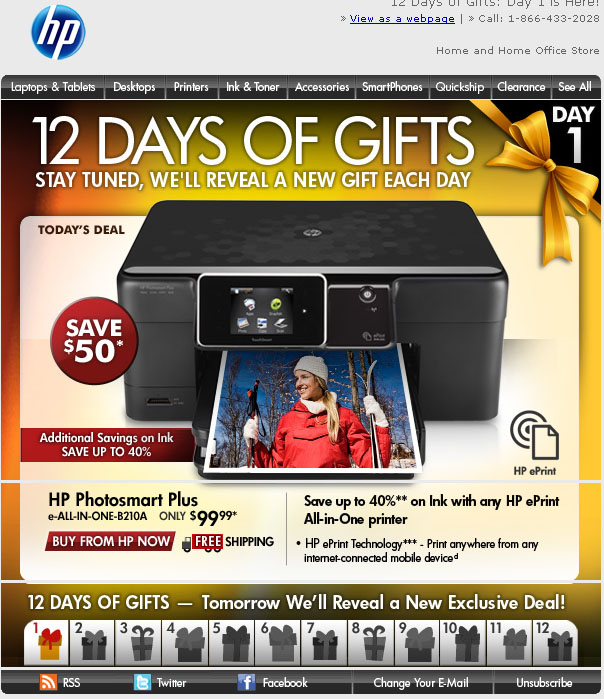