It’s been reaining year in review emails in my inbox, so I thought I’d share the odd one or two here on Emailblog. The Tumblr year in review is up first. Apparently they had quite a year, as 2013 is featured animated and all in their email. Here’s the email itself as a screenshot, so 2013 is not animated there: 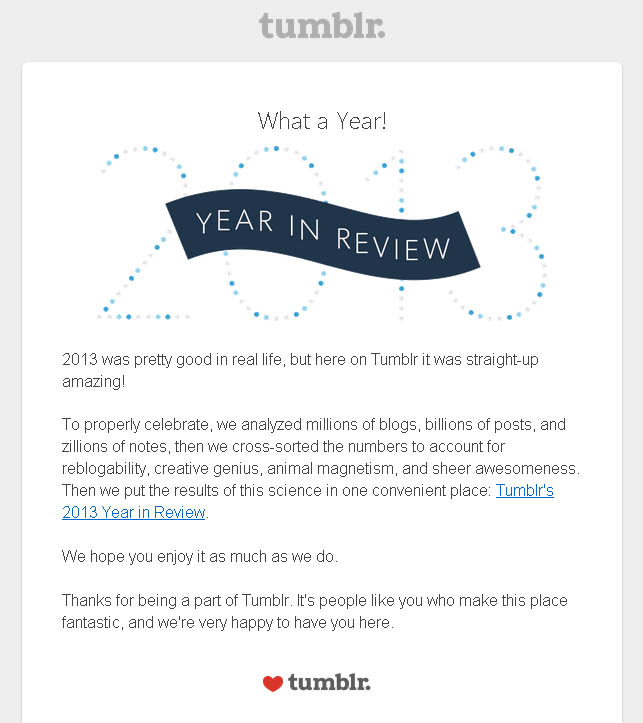 The animated part of the Tumblr year in review email is this:

The Tumblr year in review can be found on the website here. It gives an overview of top blogs, top fireworks posts, Tumblr gets deep, events in the news, and much more.
Most of the top posts are of ‘most reblogged’ type, where you can see what saw the most activity last year. For example, top gifs can be found here, but there’s much more to be found.
For those of you who haven’t been on Tumblr much (or at all), this would be a great time to dive in and check out the content. After all, Tumblr is slowly becoming one of the largest social networks, having over 300 million unique visitors per month.
The email itself tells how they appreciate the visitors and bloggers on Tumblr, and that they have taken the time to compile all that good stuff in the year in review page mentioned earlier. All in all it’s a nice email and tie-in with the page itself which features dozens of top blogs and shareables.
The animated 2013 is a nice touch to the otherwise simple email design. Then again, we’ve seen such simple design last year as well: check out this post on that.
[relatedPosts]