When you talk about email usage by age, the younger demographic is often seen as non-adopters or using it only in a limited fashion. Both the youngest age group as well as the 18-34 (millenials) age group are seen as people fully hooked on social apps and IM. For example Facebook and Twitter, and more recently the uptake of Instagram, Snapchat, WhatsApp and similar apps and platforms are used extensively.
However, when it comes to consuming news, it has become clear millenials really love email. In a study conducted by American Press Institute called ‘How Millenials Get News’ the top activity was checking and sending email: 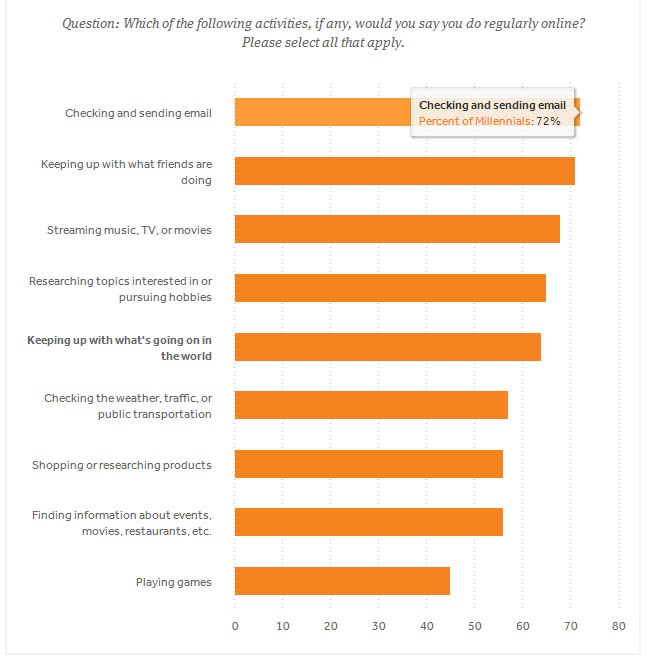 Yes, that’s 72% of respondents claiming to check and send email as top activity online. This compared to 64% of respondents keeping up with the news.
Checking and sending email is also the best result with respondents who do the specified online activitities at least once a day (top result: 81%), while checking news was at 69% and streaming music, tv or movies was at 66%.
When it comes to email marketing, an impressive 9% of respondents said they pay for email newsletters, while 5% answered paid newsletters are paid for by someone else for them. The service that is most paid for is digital movies or tv.
Besides news sources and usage of email, it’s interesting to look at social usage within the millenial age group.
Here are the stats regarding Facebook, YouTube, Instagram, Twitter, Pinterest, Tumblr and Reddit: 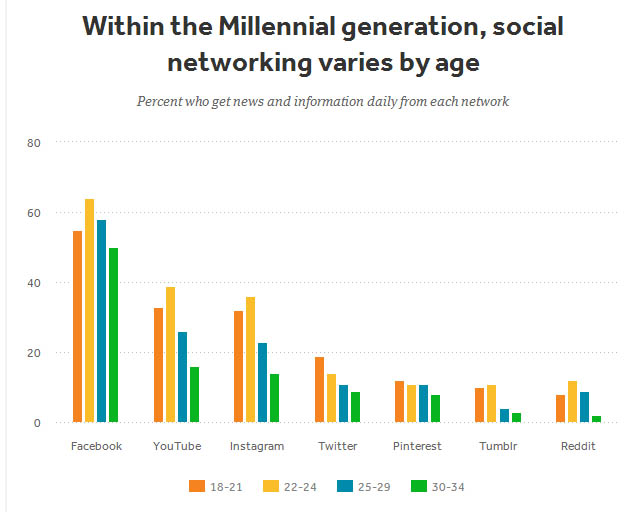 Facebook, YouTube and Instagram take the top three positions, however things level off between the age groups with the other social networks. For example, a lot more 22-24 year olds use YouTube compared to 30-34 year olds, but the difference on Pinterest is much smaller. Tumblr sees most usage with the youngest age groups of 18-21 and 22-24, while Reddit seems to be an ‘under 30’ activity mostly.
This is just a small excerpt of the large study, the results of which are spread across 9 extensive pages.
A pdf-version of the research is available here, and all findings by the American Press Institute study ‘How Millenials Get News’ can be found in this extensive article.

3 thoughts on “Study: how millenials get news, email is biggest habit”