Recently the MailChimp blog has been updated with the news that a new MailChimp will be coming in June. The post, by Aarron Walter, notes that user feedback has been centering a lot around the mobile experience since last year. Aarron notes that mobile devices are not just a trend – they are fundamentally changing our culture. After the v8 release a while ago, this is one of the biggest changes coming to the MailChimp platform.
He goes on to say that the MailChimp team has spent a lot of time traveling to interview customers, compile feedback via support and through thousands of surveys they conducted.
The new MailChimp will be responsive, first of all. Regardless of how you will access the platform: it will reflow to fit your screen of choice. 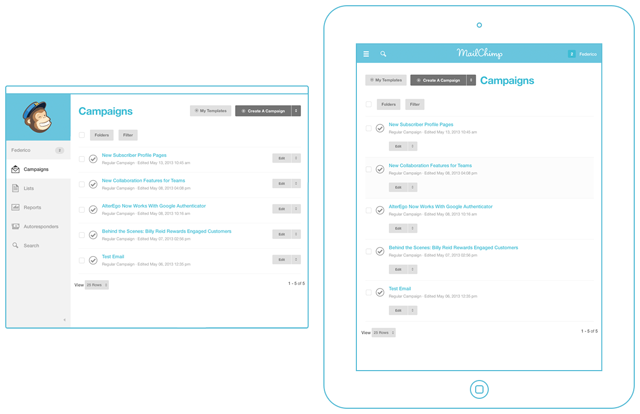 The reason for making it responsive is that MailChimp’s users are still doing the same tasks as they always did, but through more interfaces than in the old days. MailChimp Mobile is designed to be used on smartphones, enabling users to keep track of campaigns when they’re away from their desks.

The second part of the post focuses on efficiency. As much as the MailChimp crew loves great design, Aarron notes it should not come at the expense of functionality. The new MailChimp has been redesigned page by page to create a less distracting, more efficient workflow. Anything (visual elements) that wasn’t essential to getting things done has been removed. After all, less is more, right?
An example of the Campaign Builder setup page changes:

The setup page in the Campaign Builder has a lot of options, but people rarely do anything more than set a campaign name, subject line, and reply-to email. So we’ve collapsed all the advanced options, keeping them within reach if you need them, but getting them out of the way of the typical workflow.

The subscriber list view is another, often visited MailChimp page that has seen changes. When scrolling, less important columns are temporarily hidden from view. 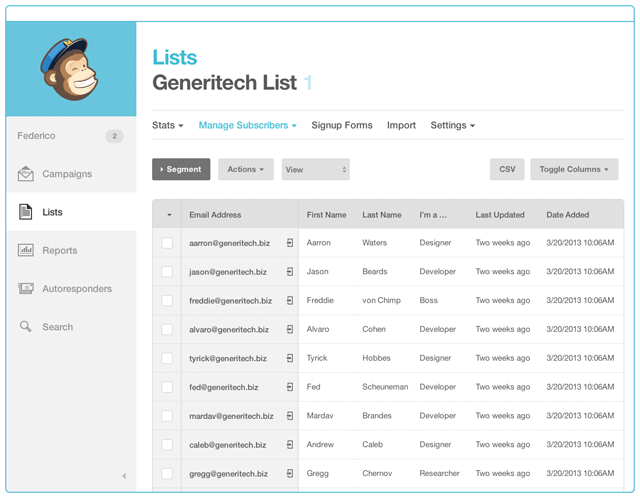 Availability will be from June, as an optional upgrade for four weeks to try it out. This is to not scare people off with a big disruptive upgrade right away – as MailChimp has millions of users, this could have quite an impact.
Source:
MailChimp Blog
[relatedPosts]