MailChimp has rolled out a few major updates to its email marketing platform in v9.0. First up, the new email designer is now default for everyone: the old email campaign builder has been deactivated. 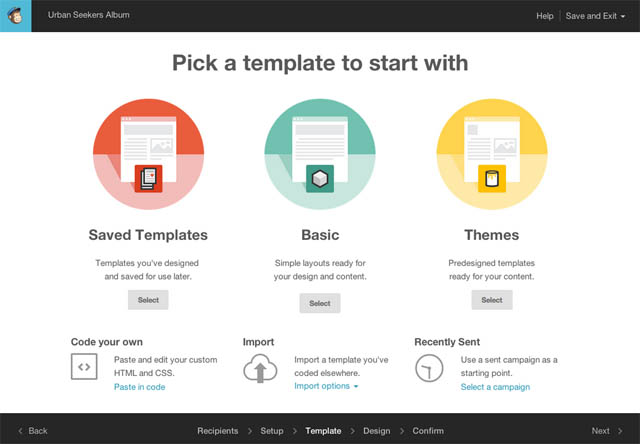 The new drag and drop editor lets you edit any template, select a basic layout or choose a theme. You can also import a template that’s premade, or paste in template code. Custom-coded templates cannot benefit from the drag and drop interface of the email designer. However, you are still able to use the side-by-side layout and other features available.
Commenting has been added to the MailChimp platform email editor to allow for collaboration within teams on multiple email campaigns. Quoting the blog post:

We’ve learned that many of our customers have teams that work together while creating campaigns. The email designer allows team members to work together simultaneously. Coworkers can watch each other edit copy and make design changes in real-time—no refresh needed.

This reminds me of Google Wave, where you could edit documents and other stuff real-time together with others.
Another part of the MailChimp v9.0 release includes updated themes. The themes, previously known as predesigned templates, have been recoded to support drag-and-drop functionality in the email designer.
Last but not least, the templates you create can now always be saved, to Saved Templates in this case. Old favorited campaigns have been moved there as well.
Read more on the MailChimp v9.0 release here.
[relatedPosts]