Yesterday the Gmail Shelfie April Fool’s joke was pretty elaborate. The Gmail team introduced the Shelfie, or the shareable selfie. The goal was to have people make selfies, and then use them in Gmail with the custom themes that have been introduced in 2012.
Over the course of the day, the Gmail Twitter account posted many examples from people who made a shelfie, including well known stars like Katy Perry, Blue Man Group and Shakira: 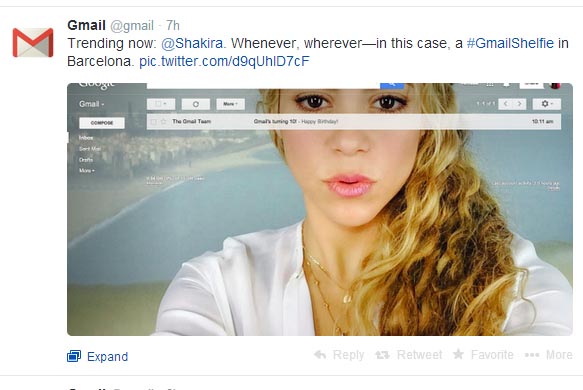 The official announcement mentions the following:

Gmail Shelfie is built on the idea that you shouldn’t be selfish with your selfie. With just a few clicks, your mom, your aunt, or that girl you have a crush on can set your Shelfie as their Gmail theme so they can enjoy checking, reading, and writing emails while seeing your friendly face in the background.
Got an awesome selfie? Upgrade it to a Shelfie! Simply open or refresh Gmail on the desktop and share it with your friends. If you’re looking for inspiration, set your theme to Gmail’s top trending Shelfies. You can also see who’s currently trending on our Google+ page.

A lot of people picked up on the Gmail Shelfie April Fool’s joke, judging from the number of tweets with the hashtag #gmailshelfie. When you’ve uploaded your selfie and hence, made it into a Gmail Shelfie, you can set the theme to Trending Shelfies in Gmail:

Good job Gmail on this April Fool’s joke: quite original and fun.
[relatedPosts]