Hangouts in Gmail is rolling out as optional choice for Gmail users now. You can switch from chat to Hangouts, and it will give you a consistent way across Google services to communicate in real-time with others.
For example, you can start one of your Gmail Hangouts on your phone, and resume in the Gmail interface later when you’re ready for it. 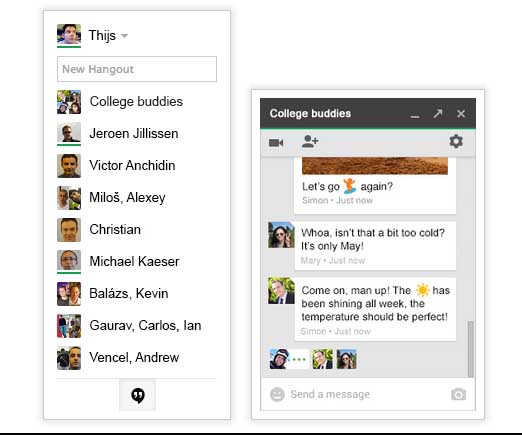 Here’s a video of Hangouts, titled: Conversations that last, with the people you love

In Gmail, when you click ‘try it out’ next to the chatlist, you can switch to Hangouts. Profile photos will be shown by order of most recent conversation. Hangouts becomes available in the following ways:
Gmail, Google+, Android phones and tablets, iPhone, iPad and iPod Touch and as a Windows, Mac or Linux desktop application using the Chrome extension.
More info can be found on the Google Support pages regarding Gmail Hangouts here.
A quote from the recent Google+ update regarding the new Google+, Stream and Hangouts:
Consider: 190 million people are now active in the Google+ stream, and 390 million are active across Google (+1’ing apps in Google Play, making video calls in Gmail, sharing videos from YouTube…). It’s a community of artists and astronauts and computer scientists and quilters — and it’s awesome. But we’ve only just begun.
On using many different devices:

These days people increasingly move between devices. So to build software that builds real relationships, you need a simple and beautiful experience across mobile and desktop. We’ve worked hard to make our phone and tablet apps intimate and immersive — today we’re just improving them further and adapting their design for the web, including: