Knotice has published new research about mobile email opens. The report claims that mobile email opens have risen to an impressive 41%, and will surpass 50% in the next six to twelve months. The mobile email open rate was 27% at the same time last year. See our previous post on Knotice’s previous report here.
Here’s the key findings in the report, based on the second half of 2012:
Mobile Email rising steadily to 41 Percent: email opens on a mobile device (smartphone and/or tablet) during the second half of 2012 rose to 41 percent. A 51 percent increase over the former mobile email open rate of 36 percent from the second half of 2012. These results shows that the steady, strong increase in mobile open rates continues, which underscores the importance of having a mobile-first mindset.
Consumer Services Industry Approaches the ‘Mobile Tipping Point’: Nearly half of all emails opened in the consumer services industry were opened on mobile devices during the second half of 2012. For other industry segments, the mobile tipping point is rapidly approaching and email and mobile marketers need to begin planning for a point in time when mobile users will be the majority audience.
Emails Are Not Being Viewed on Multiple Devices: If a consumer doesn’t act on the email when they open it, it is highly unlikely they will reopen that email on a different device. Knotice data found that only 0.07 percent of emails were opened again on multiple devices, down from 0.09 percent during the first half of 2012. This means that even if a compelling subject line was created and the right offer was delivered, if it the email renders poorly on a mobile device or if there isn’t a seamless optimization of the post-click experience, there is a missed opportunity with the mobile opener.
Hospitality and Consumer Services See Highest Mobile Email Open Rates: The Hospitality and Consumer Services industries have seen the highest mobile email open rates with 44 percent and 49 percent respectively. 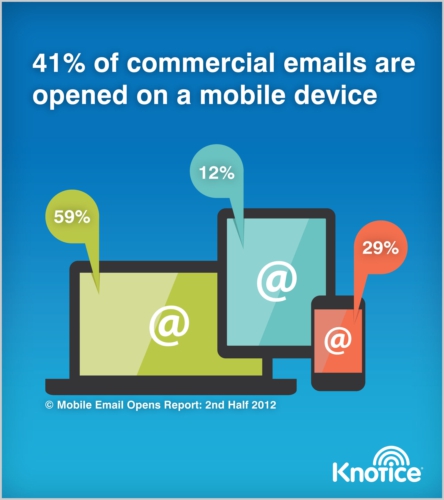 The full report is available as a free download here.
[relatedPosts]