A new Gmail layout is being tested by Google, according to Geek.com.
Here’s what the new layout looks like: 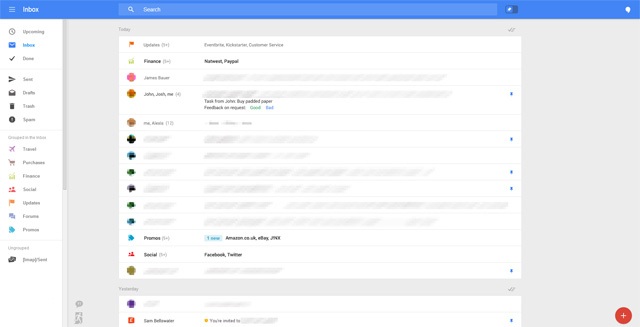 Click the above image for a larger view for the new Gmail layout.

At first sight, it looks like they’ve taken a very minimalistic approach to the Gmail web client interface. Things have become either fly-in or collapse compared to the current Gmail layout.
Of specific interest is the email-as-task part of the interface. Check out this part of the inbox:

As you can see, a task was sent via email, and the receiver can respond to the request with feedback: either Good or Bad. Excellent! The email inbox should be a task manager anyways. Do this now, do that later, this needs discussion. It’s like meetings: they should only be for two things. Deciding what should be done when, in what order, or demonstrating/reporting on what has been done. In this case, the task via email design in the inbox by Gmail is something that appeals to me for sure.
Also, it seems either the tabs are gone, or have been grouped together (maybe as custom tab option) in a timeline fashion: see the example below of the Promos (Promotions) and Social messages in the inbox:

Lastly, pinning emails seems to be replacing the starring of emails. Also, composing a new email or a new reminder has been moved to the bottom right.
You can read the full post on Geek.com here.
As of now, there is no known date of when (and if) this new Gmail layout will become available. The last change to the Gmail inbox was the change for the promotions tab. The classic list view has been reworked by the Gmail engineers into a Pinterest-style Grid view. Read more on that in the official blog post here.
[relatedPosts]