It has been a bit quiet on the webmail-front lately, but Microsoft is heating up the battle with Scroogled, a new website dedicated to bashing Google’s Gmail.
The website looks like this:

As you can see, it’s making fun of the colorful Google logo, and bashes Gmail for looking for keywords in emails to provide targeted ads.
The Scroogled website is offering a petition to have Google stop going through emails for keywords, as well as promoting Outlook.com as a better webmail service.

On the website there are also two videos available to tell how bad Google is, including a part of Eric Schmidt, Google Chairman, quoted saying the following:

The second video shows a man and a woman discussing email, where the woman notes that Google goes through his email, and he admits being Scroogled:

The website was down for a short while yesterday actually, only giving a web server error to visitors: 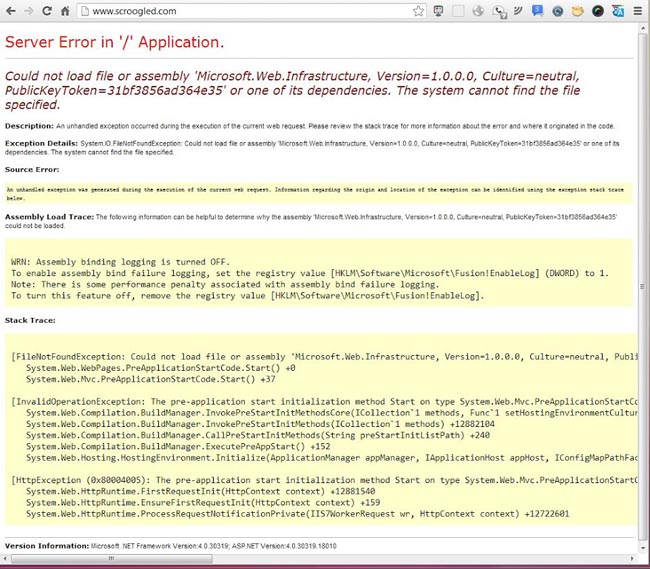 Remember my previous post about the webmail wars? The Gmail Man was part of that story, but Microsoft seems to be taking it up a notch with Scroogled this time, really focusing on that privacy issue: apparently they feel it’s a very big deal. Privacy is important of course, but the way Gmail works is just the way Google search works: with keywords. Will Microsoft be bashing Google Search next because they display ads based on your search queries and promote Bing?
As one Twitter user puts it, he’s not impressed:

Gmail goes through my email to sell ads, but it’s so much better than Outlook, I don’t care. #scroogled
— Moses III (@mosaeus) February 8, 2013

I wonder what the actual purpose is behind the ‘Have you been Scroogled?’ website – besides of course having people switch over to Outlook.com. Bashing competitors in advertising is nothing new, and especially in the US they’re a fan, however this campaign might come across as childish and lame and work against Microsoft’s intentions. Time will tell.