The average email user received 5,579 messages and responded to 869 of them in 2012.  That’s one of the results in the Cue email stats presented in the 2012 Cue Review.
If you don’t know Cue, here’s a quick description (from their website):
Cue is a free service that helps you stay one step ahead by turning your email, contacts, and calendar into an intelligent snapshot of your day. Cue is the best way to keep up with work, life and the daily events you care about.
Cue has generated some nice email stats over the past year, from all the data generated by its users.
Fun fact which you could have guessed: most used emoticon:  : )

Next up in the Cue email stats are the busiest moments of the day and busiest days of the week: 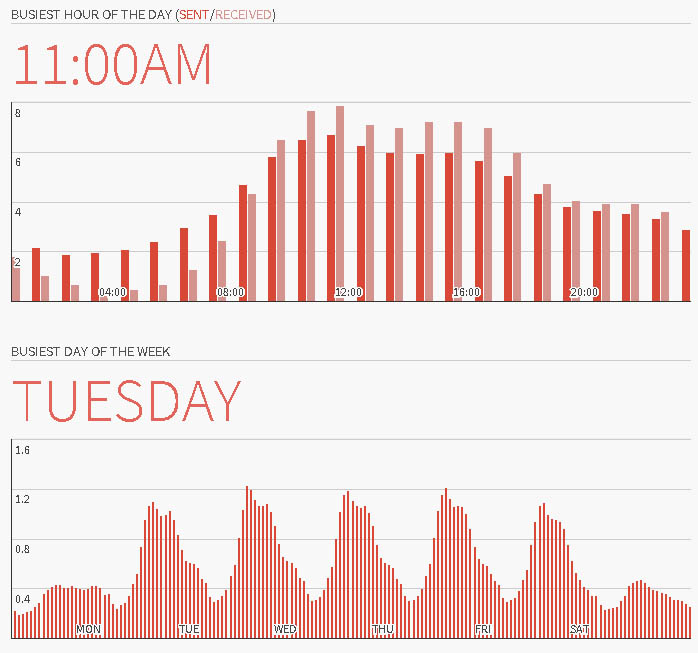 It’s interesting to see the peak for busiest hour of the day just before lunch time, around 11AM: that’s probably when many meetings have concluded, people get dished out their tasks of the day or week and get cracking at reserving everyone’s agendas, spreading attachements and doing reports.
Tuesday as busiest day of the week is actually quite logical. It’s the day most people are in the office, and -not- in meetings (they happen most often on Mondays).
Dogs were also more popular to mention in emails: of all animals they took #1 with 38%, ahead of cats (32%), fish (19%) and horse (11%).

If you want to take a look at the whole 2012 Cue Review, have a look here.
[relatedPosts]