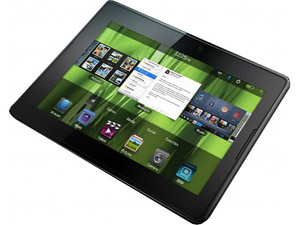 RIM’s Blackberry PlayBook has finally received a software update to handle email the way Blackberry smartphones do. Last week the update was released, so now users of the PlayBook don’t need to tether the device to a Blackberry anymore. They can now use the PlayBook email directly on the device.
The tablet is powered by the new Blackberry tablet OS based on QNX, which is planned to be released on a Blackberry smartphone later this year as well. Being the single device now sporting the QNX-based OS, it doesn’t have many apps available. However, as part of the software update it is now possible to run Android-based apps on the PlayBook: a big plus as the Android Market has a lot more apps available.
The third part of the software update includes a dedicated store specifically for video. For the time being that video store will only be available in the USA. Next to that the browsing capabilities have been improved as well.
However, it’s not all good news: this update is still lacking the popular Blackberry Messenger service, also known as Ping to many people. That service is one of the core (and free) features of the Blackberry smartphone, and it’s quite odd that it’s still not included.
If you’re interested in the device, here’s a recent Blackberry PlayBook 2.0 review on The Verge.
[relatedPosts]