Yesterday a tweet by the eROI people (hi guys!) caught my attention: it stated that H&M made quite a slipup in the sending of their email newsletter. What was going on? Three things according to Dylan Boyd who posted a screenshot:

The three things Dylan points out: a noreply@ address, which is still very bad (yes, even when you provide other ways for people to contact you. Ironically, at the bottom there’s the customer service address at customerservice.us@hm.com, so why wasn’t that used as reply address in the fist place?).  The second thing is the content obviously missing, and the third has to do with the no reply address again, mentioning to put it in the address book, which is pretty odd for a no reply address, right?
This landed at 5:12 Pacific Time. Apparantly H&M got wind of it and just over two hours later, at 7:22 Pacific Time, the next one arrived: 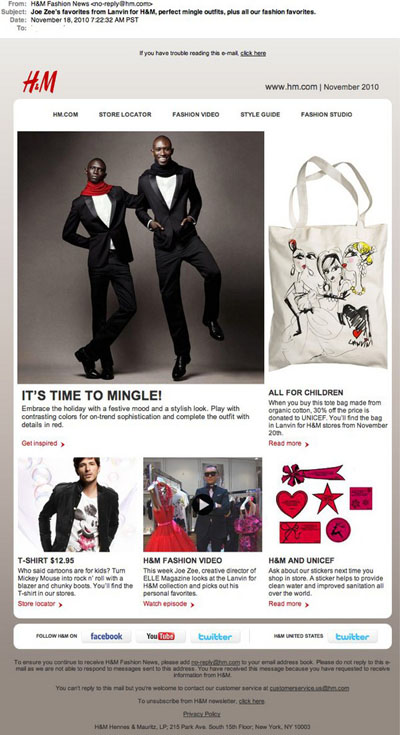 This one looks just fine with regards to the content, but no apology inside about the slipup in the earlier email newsletter.
It just goes to show that one of the golden rules of email marketing should never be broken or forgotten: test, test, and test again. There are (hopefully) still people behind all the email campaigns and newsletters, and people make mistakes. To rule out mistakes in the actual sending part a correct test sequence has to be set up, so that everything gets the green light before something is actually being sent. This way such slipups can be prevented: it doesn’t look professional in the eyes of the receiver.