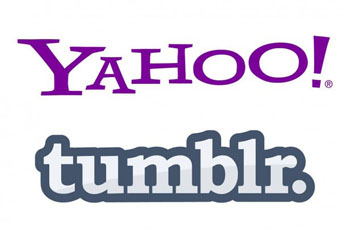 The BBC has posted the news that Yahoo acquires Tumblr for $1.1 Billion.
The Yahoo board of directors has given the green light for the deal. The acquisition is the biggest one (in financial terms) since Marissa Mayer took office as Yahoo CEO in July 2012. The acquisition involving $1.1 Billion is at a higher price than Tumblr’s corporate value, which is about $800 Million.
Since its reinvention, Yahoo has had trouble attracting younger audiences. The amount of active users and traffic that social platforms like Facebook, YouTube and Twitter have is something Yahoo is pursuing as well. The fact that Yahoo acquires Tumblr is a big step towards getting into the social platforms, with an emphasis on younger audiences.
The number of accounts and active users on Tumblr is impressive. Currently the total number of blogs is at 108.6 Million (we have an account there too), according to the Tumblr about page. The number of posts is at 50.9 Billion, while the number of employees is at 175.
Its recent promotion of its mobile apps will only increase Tumblr’s presence on mobile platforms. Even though Tumblr is growing, it’s had trouble making money. It has said no to advertising in the past, except for a limited rollout of adverts launched in April 2012. Total revenue for Tumblr in 2012 was $13 Million. This is a big contrast to its acquisition price of $1.1 Billion. Only time will tell whether it’s worth the price Yahoo paid.
NewsCorp bought social platform MySpace back in 2005 for $580 Million, but later in 2011 sold it for $35 Million to Specific Media. The new MySpace owners (which include Justin Timberlake) are now trying to make it a music centric social platform.
Source for Yahoo acquires Tumblr for $1.1 Billion: BBC
[relatedPosts]